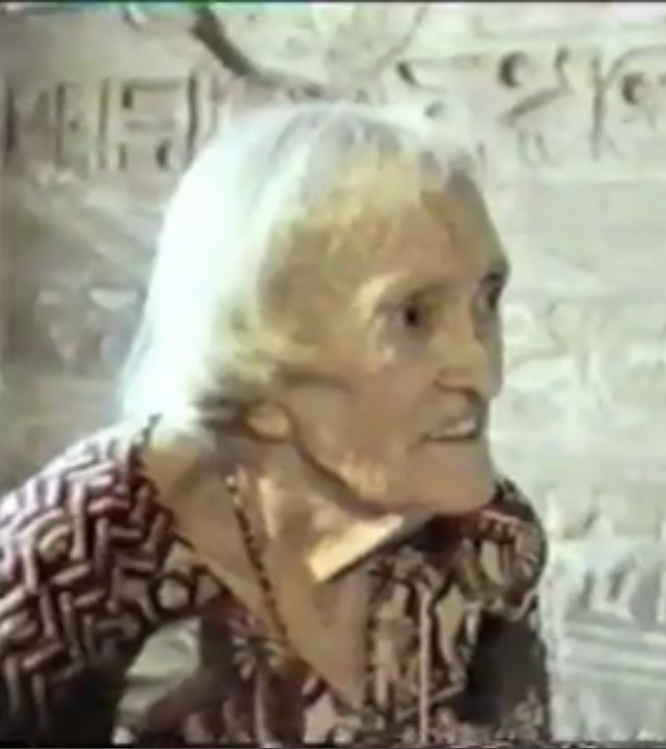 The Wisdom Teachings of Omm Sety

Synchronicity Abounds How the Omm Sety Manuscripts Came Into the Life of Merlinda Arnold…..

If we think that after the death of the legendary Omm Sety in 1981 we would never hear or feel or notice her presence and influence anymore, she or he is wrong. Omm Sety never died! What she predicted during her life became reality. Her wish to establish in Abydos again a House of Life like in ancient time, became true.

After she died, step by step she brought the right people together and guided them. Now the time is there that she will speak again to all of us who wants to learn, who wants to remember, who wants to listen to the knowledge of the ancient Egyptians she loved so deeply and she still wants to share with us. It will happen through inspiring words, thoughts, images and so important, through our hearts. Love will be the liquid. The opening of our Hearts will be the effect.

Maybe you are wondering how she will come to us? This we will tell you and about what happened since she passed away. It’s the story of a beautiful synchronicity how a 600 page manuscript, written by Omm Sety, came to a woman. Omm Sety is always patience. If you don’t understand her message immediately, she will come back to you, time after time until the right time is there. The right time is now!

We would like to invite you to read the fascinating story how this manuscript came in the life of Merlinda Arnold. The reason for us to decide to organise together with Merlinda a deep retreat around “The Wisdom Teachings of Omm Sety’, a retreat which wil take place from 27 of October until 14 of November 2021 in the House of Life in Abydos Egypt. Be sure Omm Sety will be in the middle of all of us. She will continue her work and you will feel it in your heart.

Are you interesting to receive the information about this upcoming special retreat in October, please send us your email to: info@houseoflife.info

‘This is my fascinating synchronistic story of how the manuscript of Omm Sety came to me. It was through a renowned archaeologist/Egyptologist by the name of Dr. Walter. Little did I realize how often I would hear this name.

When I was in massage school a fellow massage woman was working on me and said OHHHH I’m really getting Egypt, and she had just read the book ‘In Search of Omm Sety’ and told me that I must read it and handed me her copy. That night, my son and I went to a video store where I had never been and the man behind the counter said OHHHHH you’re here about Egypt, but I said no I’m here because my son is looking for a video. The video store clerk said that he was a portrait artist and there is a family who he just did a portrait for who I need to contact and he gave me a piece of paper with an address on it. So the next day, I took out the book’ In Search of Omm Sety' and on page 54 there was a footnote that said that the unpublished manuscripts were in the possession of a Dr. Walter, in the next town over. The next day I found a crumpled note in my raincoat that I forgot was there, and it was the name and phone number of Dr. Walter, the renowned Egyptian Archaeologist who the video man told me to contact!  The synchronicities kept showing up!

So I contacted him after a couple of weeks and went to his house and he talked about the manuscripts of Omm Sety and how he felt that I was like Omm Sety because I seemed to have that psychic ability. He said I was the perfect person to read the manuscripts. I didn’t take the manuscript at this time and then moved to the Southwest where I was going to graduate school.

So a year or so later I was with my Jungian therapist getting my graduate degree in counseling. I had to see a therapist because I was getting my degree in therapy, and it was required. She said that I have so many synchronicities happening around me, that she referred me to this palmist she knows, for more answers about what I was experiencing.

Shortly thereafter, I went to see the palmist, who looked at my hands and saw I had some unfinished business from my past and recommended I return to where I grew up. She continued by saying there’s something mystical in my palm and she thinks it has to do with the ancient mysteries. During this time I had a son and we built an Earth ship in NM, and the only thing I could think of was the Omm Sety manuscripts and Dr. Walter’s family. The whole thing was becoming surreal at this point. I flew back to Dr. Walter’s home and was given the manuscripts to read and go through and so I did.

I took them back to Santa Fe, and had a yurt built for a space to retreat, read and study the manuscripts, and to have women’s groups. The man who was building the yurt was so interested in how enthusiastic I was about the project. I told him about the manuscripts and he said that he had a teacher at Vassar who was a great teacher, inspiring enthusiasm, and he said his name was Dr. Walter. I was like, are you kidding me!

So I became very good friends with Dr. Walter and his family. I helped mentor one of his daughters when she was in TCM school for acupuncture. So I studied Omm Sety’s manuscripts while going to grad school for 2 years for a PhD and Doctorate in Spirituality.

Around that time, in the year 2000, I went to Egypt again. Even Abydos which at the time was difficult to get into. I met Horus from Abydos who lived in Abydos, who was saved when he was 4years old by Omm Sety. I don’t know exactly what she did to heal him, but the synchronicities kept going on.

It was a few years later that I decided to go to Connecticut and return the manuscripts to Dr. Walter. After 7 years I felt I had enough, and I was done!. During this time I had a friend in Scotland who I went to see after I released the manuscripts. After a year or so, I moved back to the states, and hired a woman from a friend’s recommendation to help me with filing papers and general organising since that wasn’t my forte. I went to the garage to see if there were more papers to organise that I brought back from Scotland, and I looked down in this box and yelled WOW that’s Crazy! Here’s another copy of Omm Sety’s manuscript! Just then, my helper started screaming about how amazing Omm Sety was and how she was the most important person in her life, and Omm Sety really impressed her so much that it actually changed her life.

She was struck by the knowledge of someone out there that could break through the barriers of what we know and understand about time and space. My helper was in Luxor, Egypt, because her father was associated with the Chicago House and she happened to be there in time for Omm Sety’s birthday. All the Egyptologists who hired Omm Sety to show them where to dig were celebrating with her. According to my sources, when showing these Egyptologist where to begin their excavations, Omm Sety was never wrong!

The woman I hired said that it was the highlight of her life. She was so taken by Omm Sety’s knowledge, healing abilities and wit, and was impressed how clairvoyant Omm Sety was.

This last synchronistic experience told me that I HAD to go deeper into studying these manuscripts- to draw from them all the healing wisdom that this great woman shared in her writings, of which there were more than six hundred. Her accuracy is astounding and her commitment to recalling the Ancient Egyptian Mysteries is unparalleled.

In these last few years, Omm Sety has come to me so clearly that I have been able to channel her.  Her message is of love and transcendence. It is the story of the heart, that the heart never forgets love. Love is eternal.

I have written down and recorded these sessions so that others may experience the incredible breakthroughs I have experienced from Omm Sety’s wisdom. I look forward to sharing all that I know about Omm Sety and Egypt with you during our expedition to Abydos in October 2021. In the meantime, I will be hosting seminars, heart opening sessions and the SaRa technique that I developed through Omm Sety’s teachings.’ 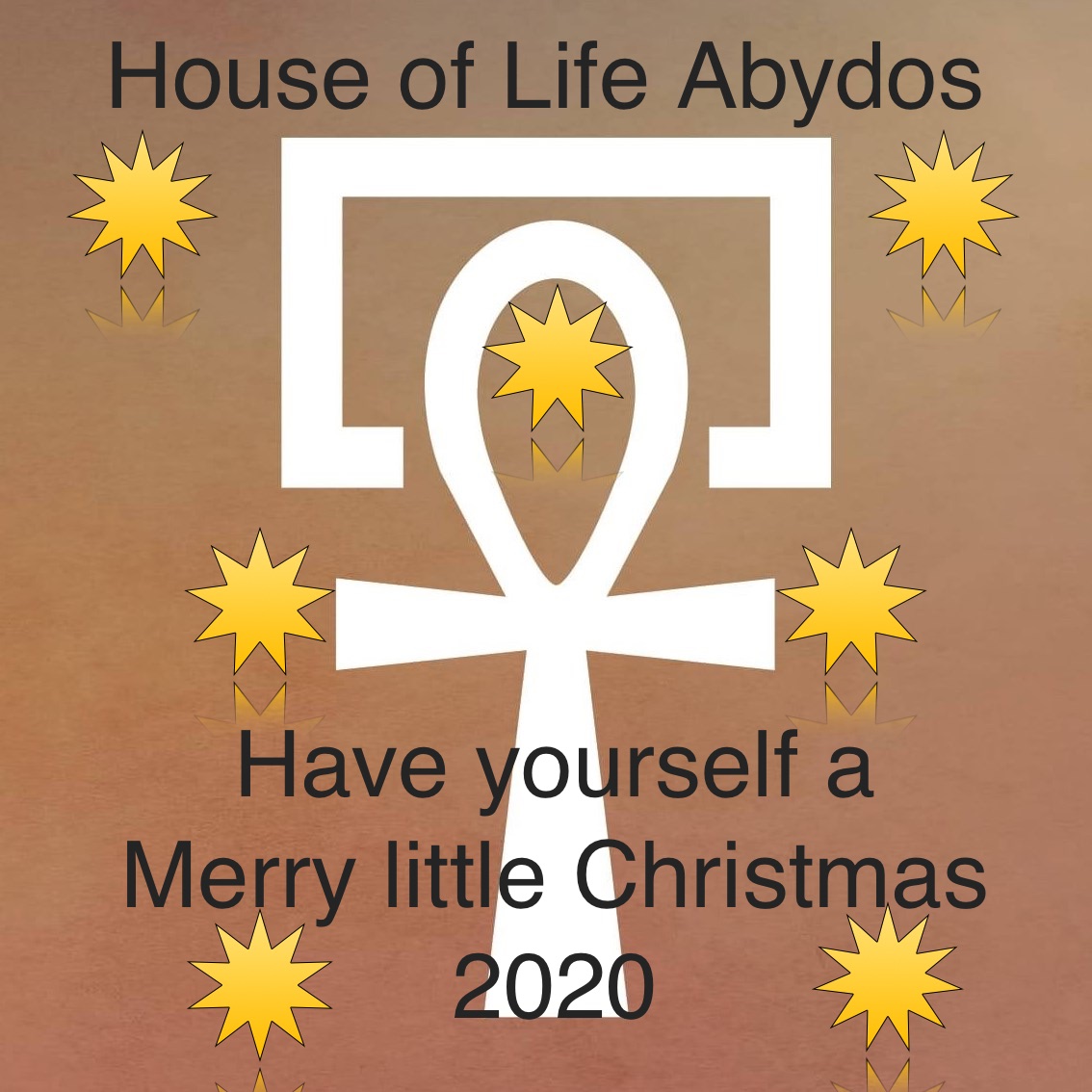 Merry Christmas to all our friends

We would like to wish all our friends all over the world a wonderful Solstice and a Merry Christmastime.

Have yourself a little merry Christmas.

Stay strong in Love and Light,

The crew of the House of Life Abydos. 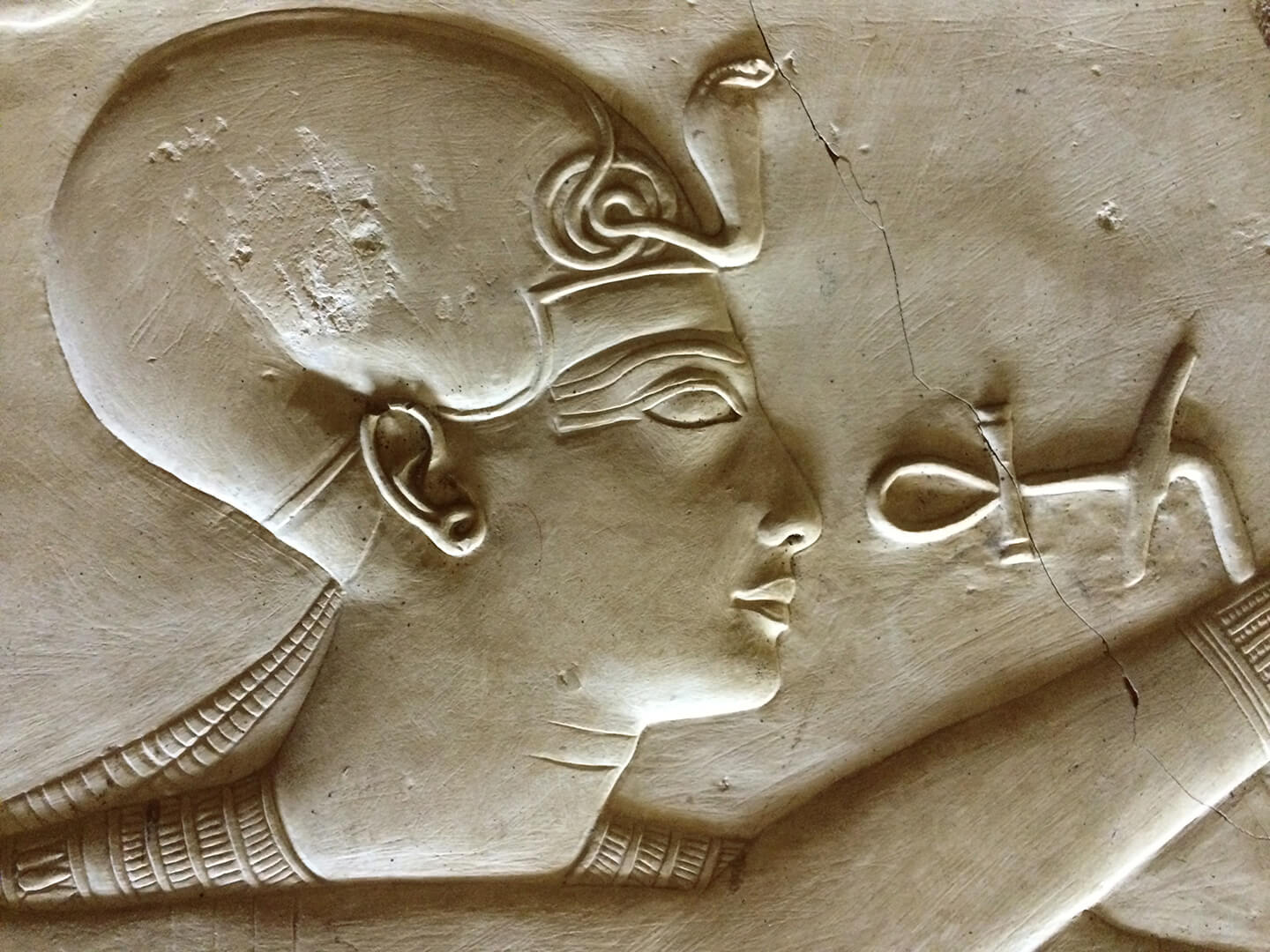 Unfortuatlly the COVID-19 pandemi has forced us to move the conference to 2022. Due to worldwide travel restrictions and the uncertainties surrounding the pandemi, there were no sufficient registrations received. We are pleased that our team of lecture speakers and workshop leaders want to continue to participate in the conference program in 2022.

The House of Life Healing Conference is then scheduled from February 21 to February 27 - 2022 The official opening will be on Sunday evening February 20th.

Let's hope that the world in 2022 will look different again and that it will be safe to travel freely again.

Book Per Ankh - House of Life by Margreet Merenit de Boer
The book 'Per Ankh-House of life,' written by the Dutch writer Margreet de Boer, has now been translated into English... Read more

Newsletter July 2020
Two newsletters one month apart, that must be real news! That is also true! The House of Life is open again.  The... Read more 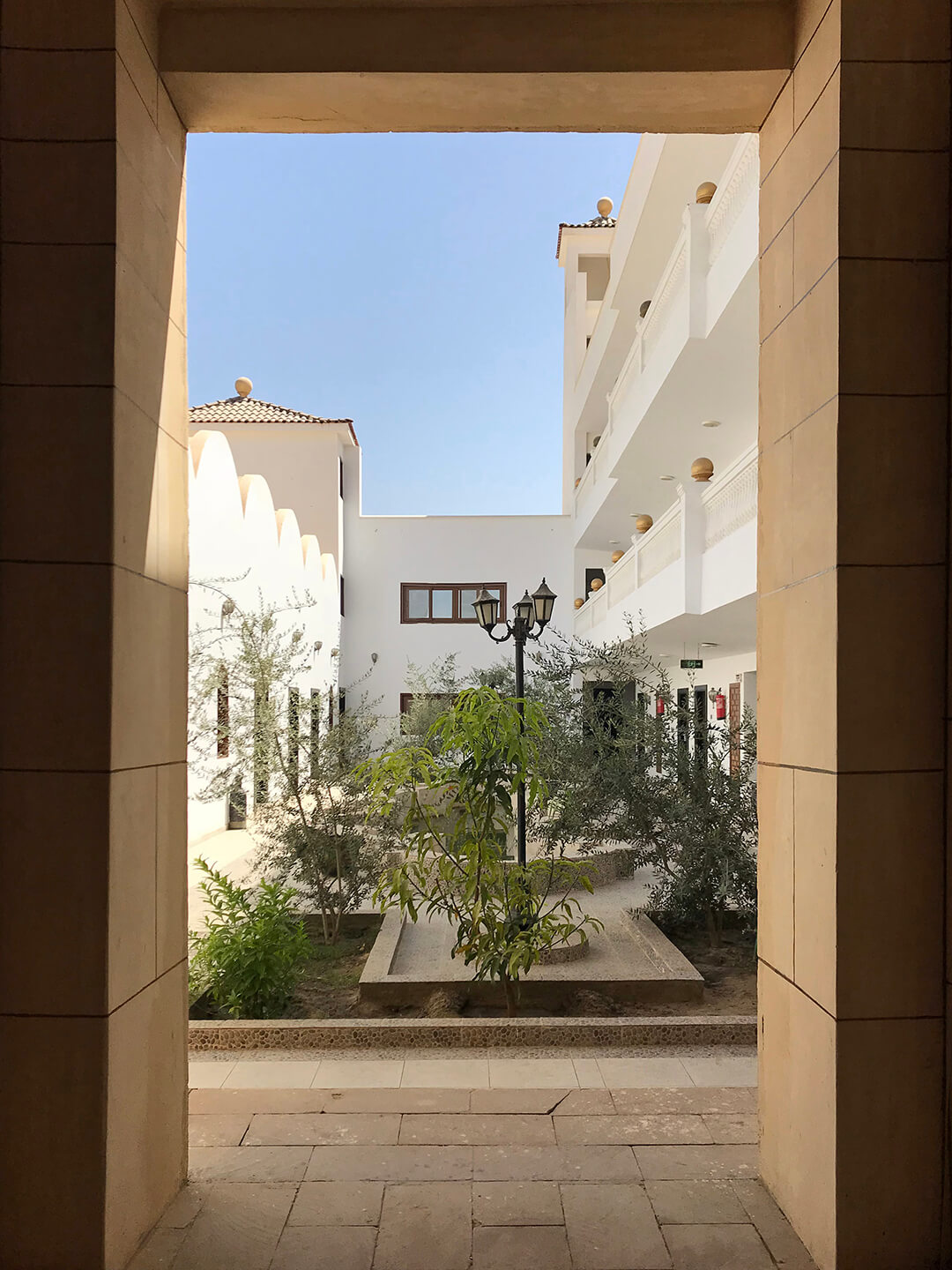